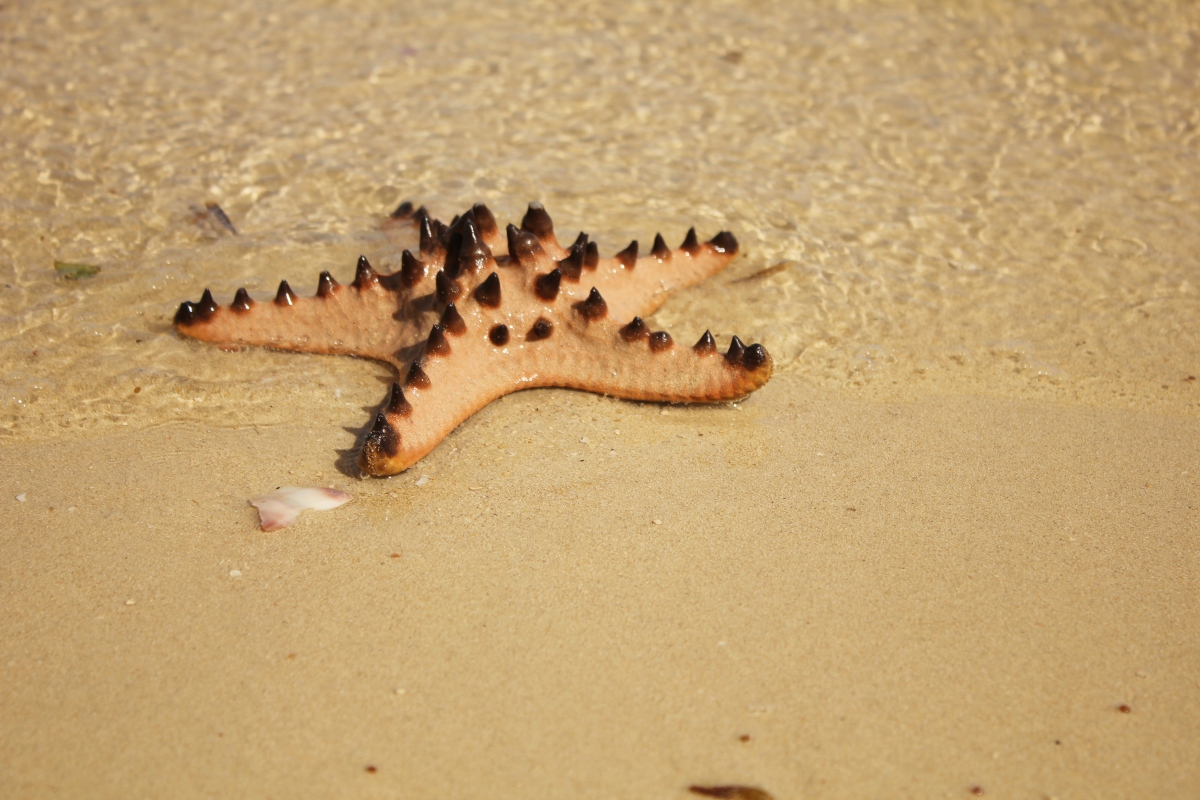 Yes, was burned by the scorching heat and exhausted from Coron’s tour but my mind and body still wouldn’t want to stop from exploring the rest of Palawan’s best. 45-minute plane ride from Coron awaits another magnificent nature blessing, another Philippine pride to the world. Just look how beautiful the island is from top.

Palawan holds one of the New 7 Wonders of the World, the Puerto Princesa Subterranean River National Park or locally known as the Palawan’s Undeground River. Curious about what made it to the top, I booked a flight not to El Nido but to Puerto Pricessa for P1,200/person! 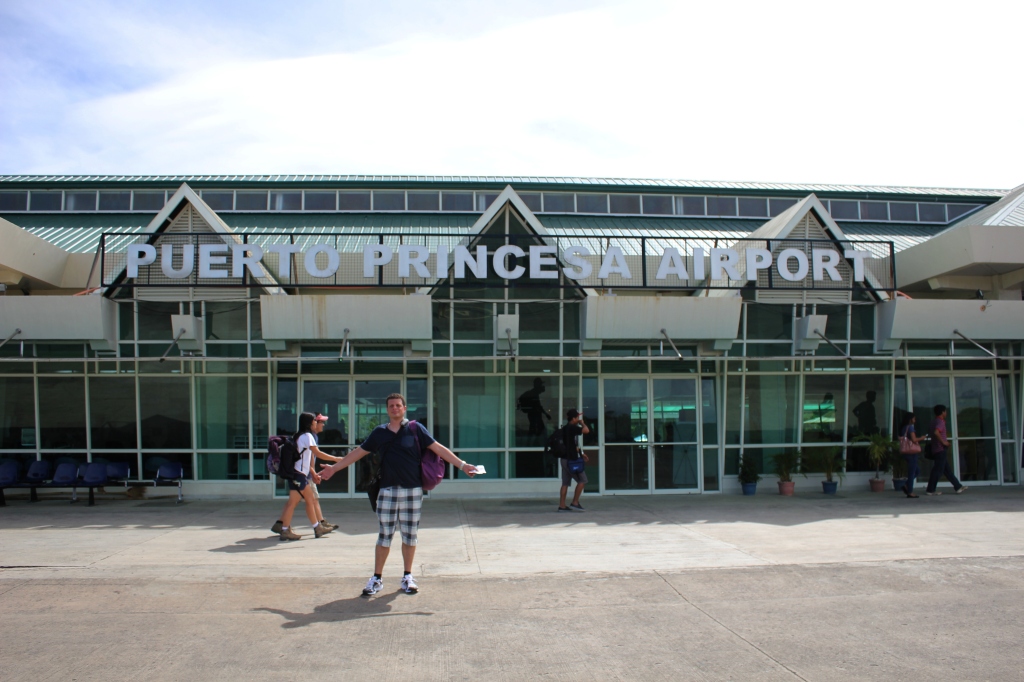 Weather was fair when we arrived and super sarap ng hangin. Palawan is one of the cleanest provinces I’ve visited, walang kalat in short. Everything is just wonderful in the place from people to foods and of course, the sceneries.

Palawan – One of the National Geographic’s Top 20 Best Destinations in the World for 2011! Naman and couldn’t agree more. Puerto Princessa, the capital city of the province is blessed with so much of nature and people. Lahat amazing and super sarap sa mata.

This entire trip was arranged by Audissie Pension Hous. *thanks Bayoi for the recommendation. Check website for cheap Puerto Princessa tours and packages.

Our first stop? Honda Bay. Going to Honda Bay, me and David were entertained by various native shops that are selling wooden crafts for a cheap price. I got my share of carved wooden sun for only Php200 for 2, YAY sulit na sulit, perpek! 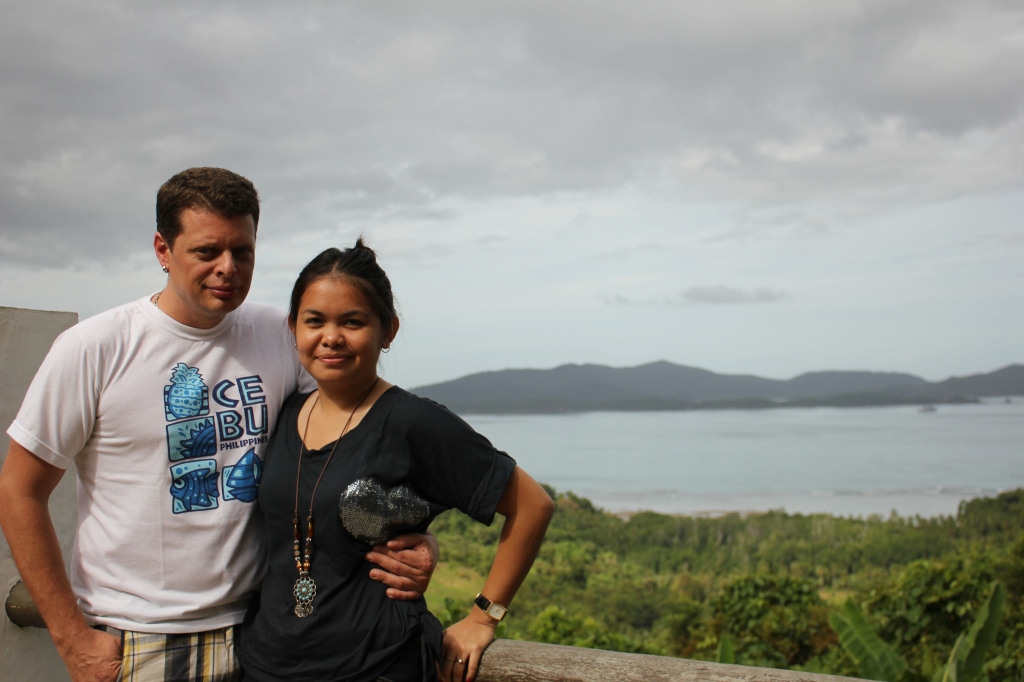 The famous Honday Bay at the back, very calm and beautiful! 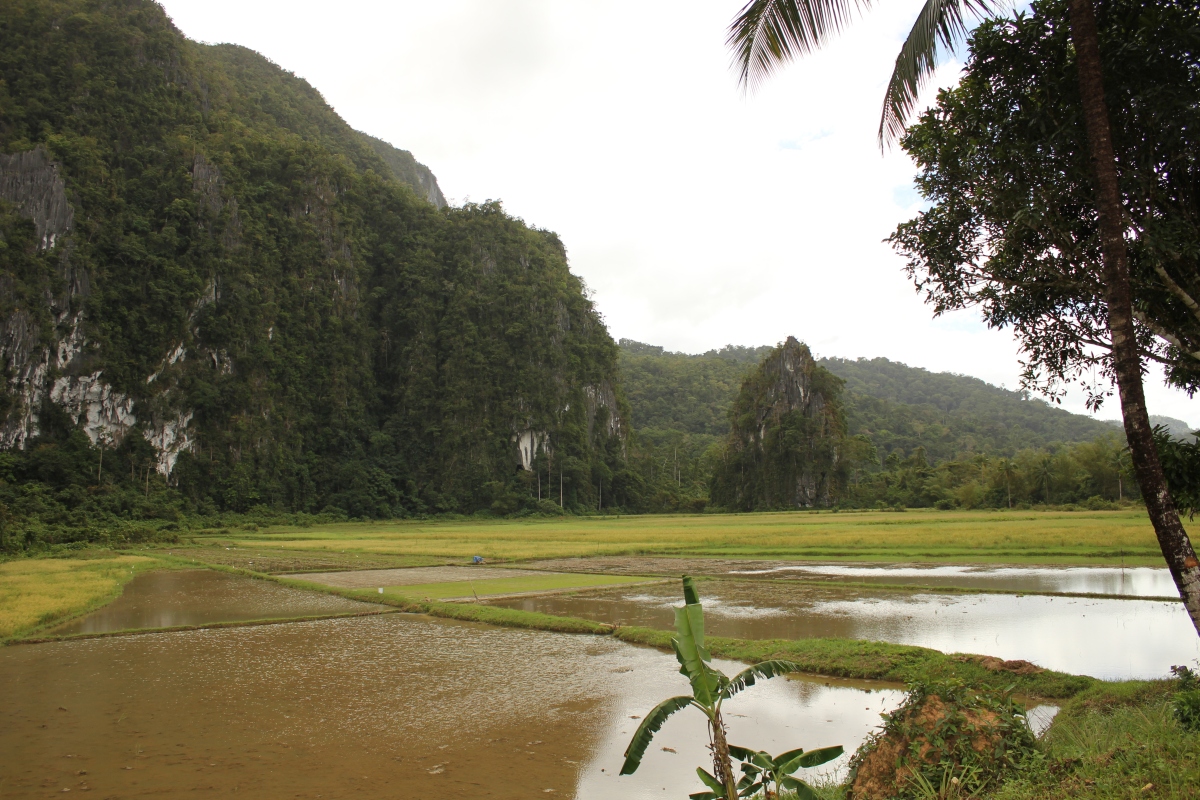 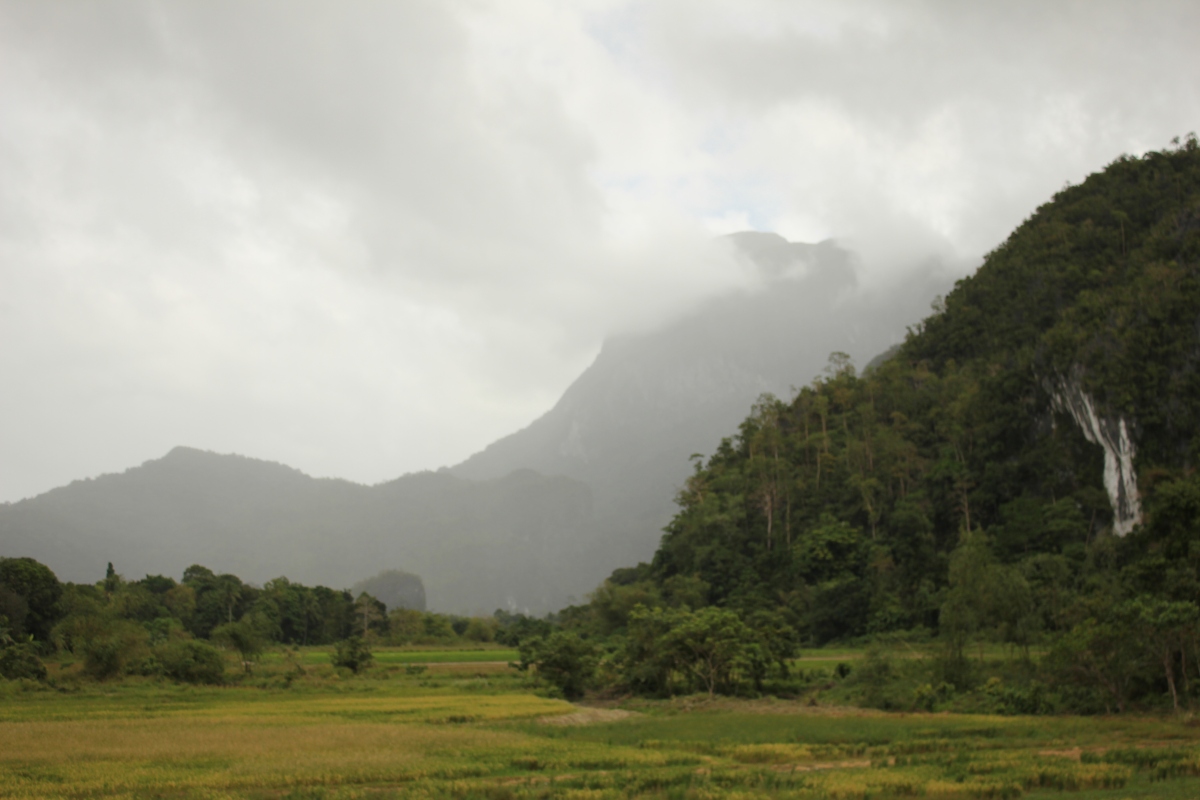 I can feel na malapit na talaga kami sa Underground River ng magsisulputan na ang mga limestone caves. Palawan got a couple of them, making the place even more unique and a must-see. 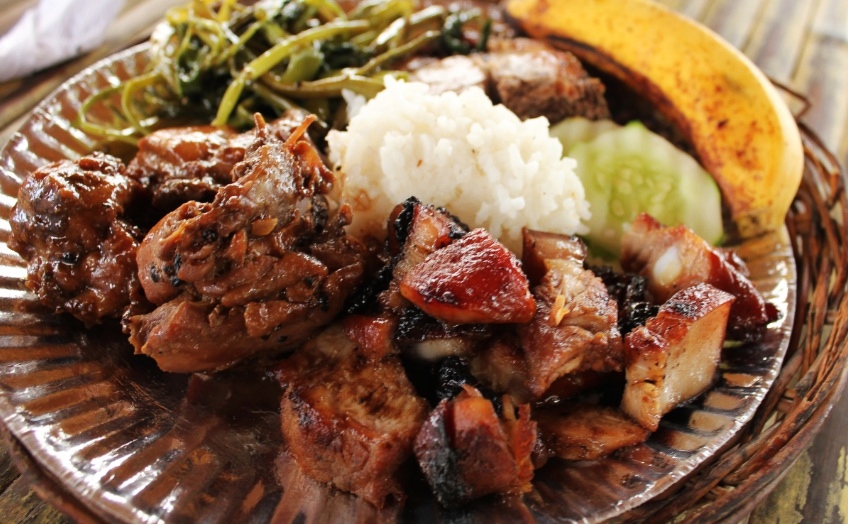 It wasn’t only our eyes that was fully treated but also our hungry tummy. The tour staff has served us the most delectable foods, super perfect pang-lunch. Not far from where we were sitted was this amazing and relaxing ocean view.

After an hour of lunch, we were called to prepare for our next drop: Underground River na!

This is what I came here for, super amazing talaga si Nature! The sand was soft and the water was crystal green. Our boat dropped us at this exact spot and we have to walk a few meters more to reach the cave. Excite na excite na ako sa point na to..tug tug tug! 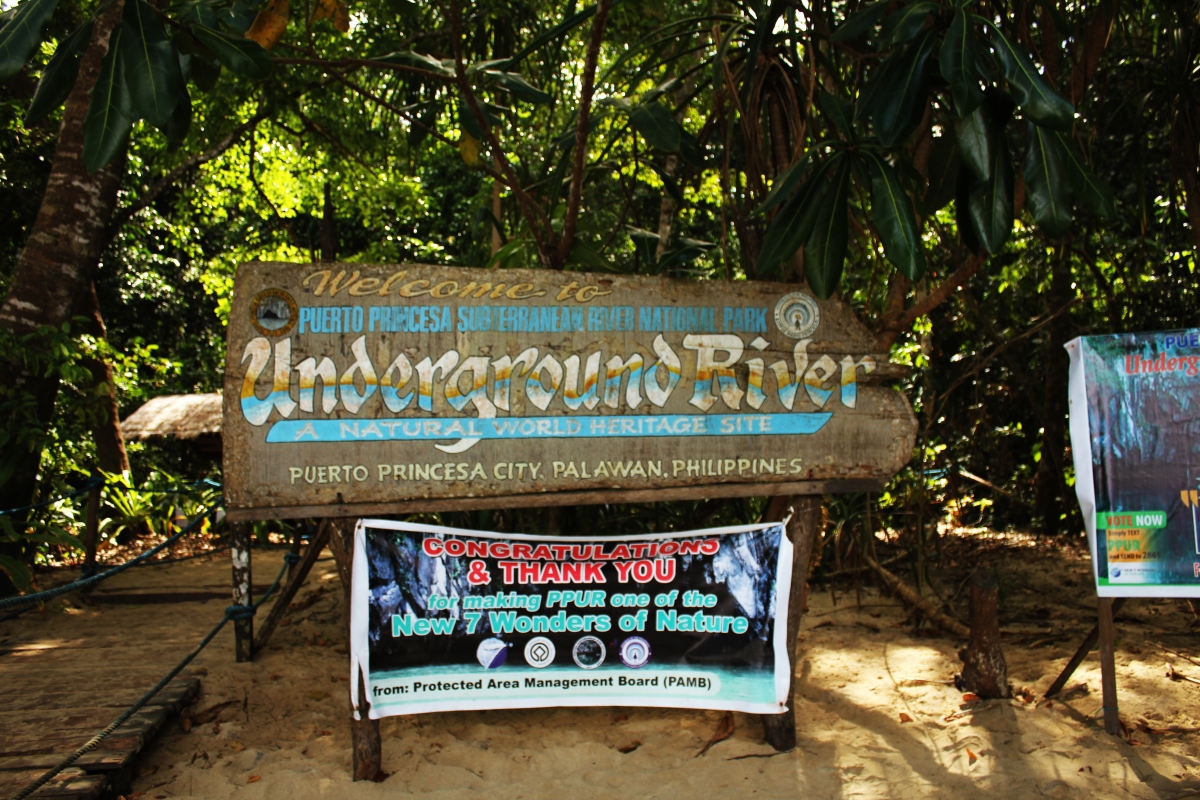 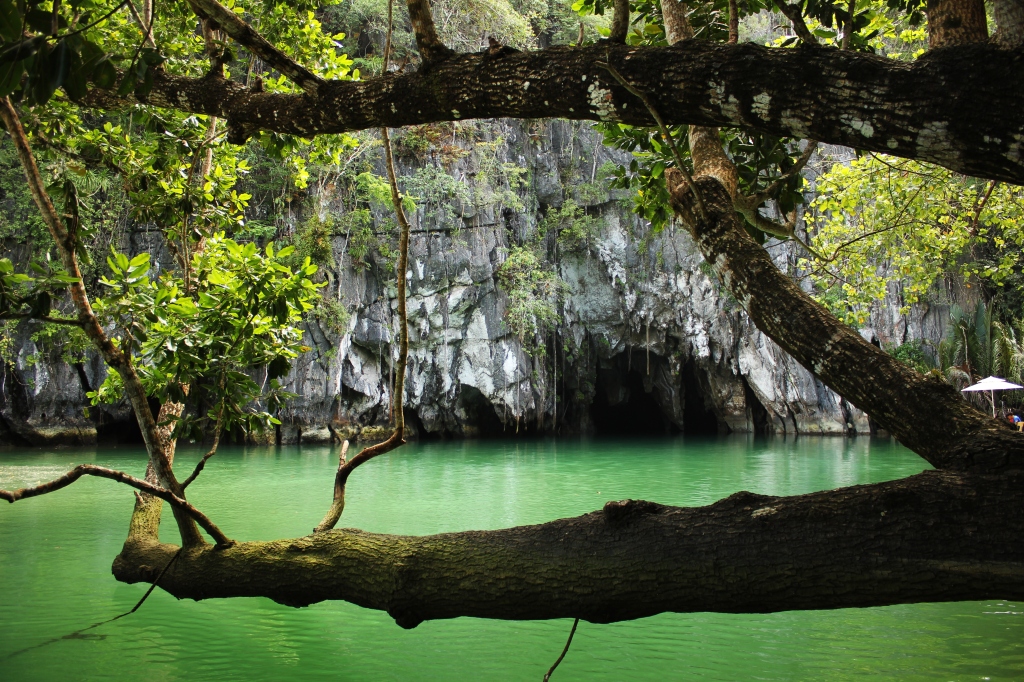 Water was cold and tide was getting high. Super green ng tubig and sometimes around 3pm, mi-rainbow pa daw na sumusulpot. WOW, can I have this view in our home too? Kakawala ng pagod! I was so exhausted but delighted when we finally arrived here. 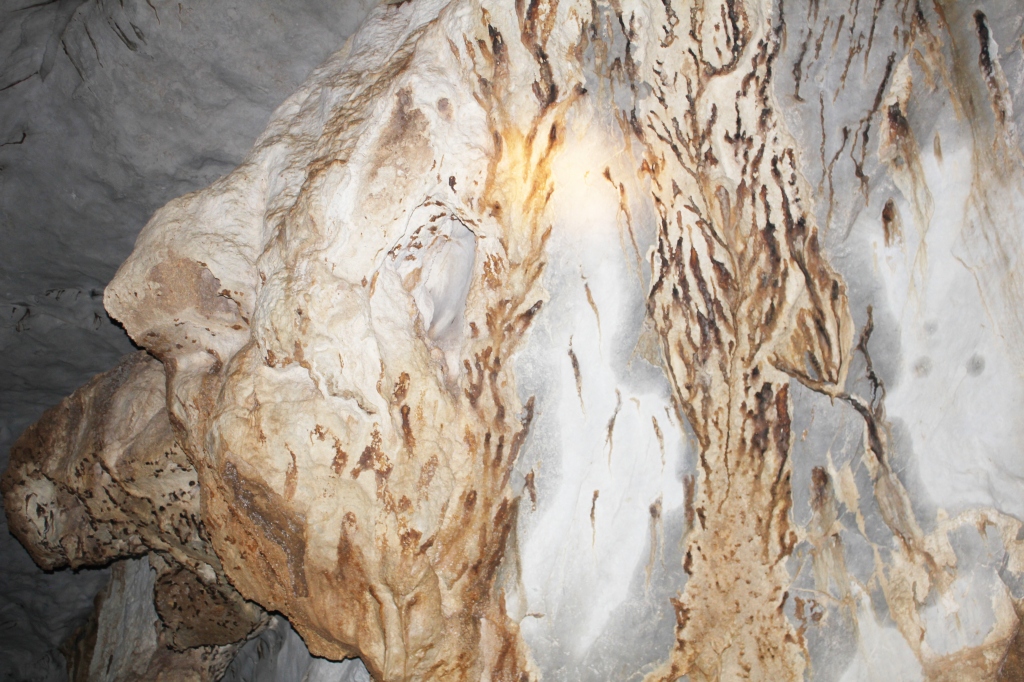 THE SAD PART: my Canon camera has stopped working when as we sailed deeper inside the cave, ayaw gumana ng flash! I only got a few shots mainly sa entrance nalang when the camera finally picked some light. 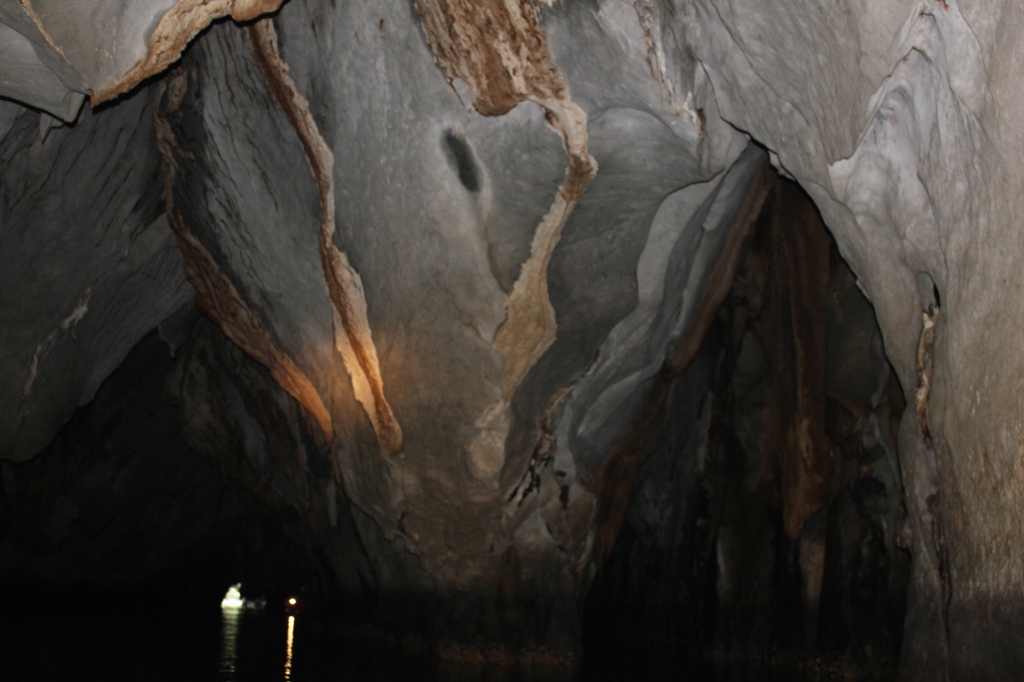 Inside were glittering figures of a rosary, cabbage, carrot, Virgin Mary, and many others carved over thousands of years. Waters dripping over the limestones and bats were just waiting to be disturbed. We were at the front of the boat and experiencing so much sights as we lightly paddle the allowed 7-kilometer proximity. *the cave is 24-kilometers long kaso wala nadaw hangin sa distance na to kaya YES, go go nalang sa 7-kilometer kesa lagutan ng hininga.

It’s cold and dark inside the cave and malalim daw talaga ang tubig. Ang daming paniki at huwag na huwag mo silang gigisingin! The only guide we had were our flashlights and the voice from the boatman behind.

1. On November 11, 2011, Puerto Princesa Underground River was provisionally chosen as one of the New7Wonders of Nature. This selection was officially confirmed on January 28, 2012.

2. The cave also includes major formations of stalactites and stalagmites and several large chambers, including the 360-meter-long Italian’s Chamber with approximate 2.5 million square meters volume – one of the largest cave rooms in the world. 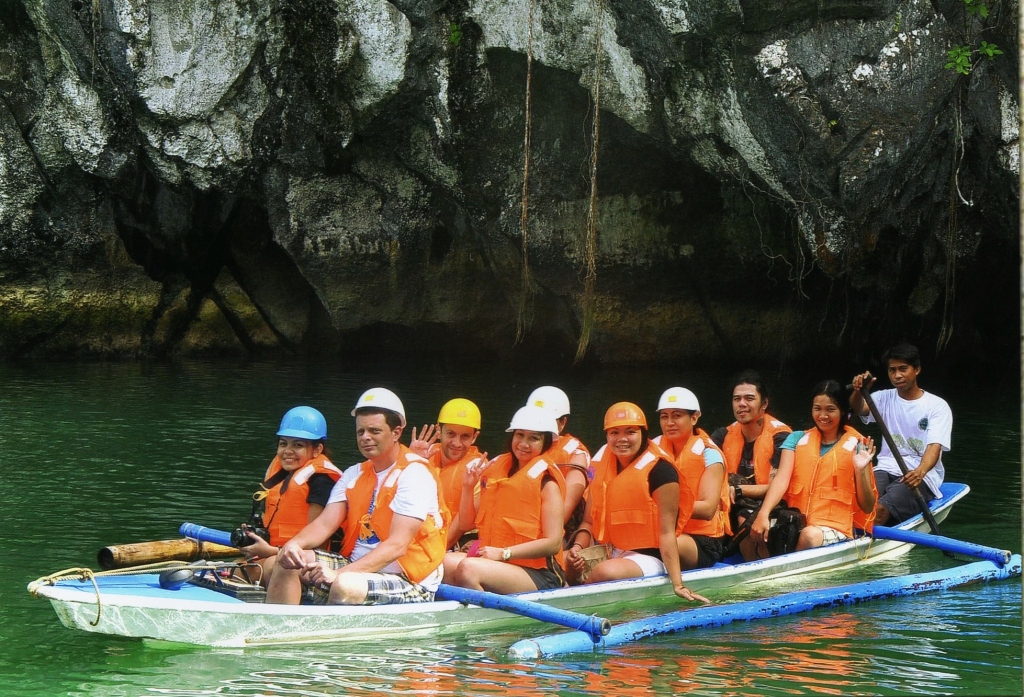 Yes, it was indeed exhilarating to physically experience Puerto Princesa’s main PAMBATO. And YES, deserved xa to take the spot as one of the NEW 7 Wonders of the World.

Clean white sand beaches are all over Puerto Princesa!

According to our tour guide, Luli Island is derived from the initials of Lulubug Lilitaw as the island is submerged during high tide and shows up on low tide. The water was a bit rough so we didn’t proceed to Snake Island nalang.

We also had a quick snorkel pero sad to say, David wasn’t too impressed by the corals unlike Coron. Waves were high that time, too.

Our 3rd and last day on the island was spent on this bike! Yes, nag-tour mi using this rental bike (800 for 8 hours and our gas).

Our first stop was the Palawan National Museum.

Me and David have also dropped at Palawans Special Battalion WW-II Memorial Museum owned by the Mendoza family. It’s said that the museum was built in memory Dr. Higinio Mendoza Sr. (grandfather of Matthew Mendoza), who was killed in 1944 due to his resistance to the Japanese.

Some of the museum pieces that are very interesting is the historic typewriter and stenography machine, which Mendoza claimed was used by Gen. Douglas McArthur in Manila, old vehicles used during WWII, rusting guns and ammunition, uniforms of American soldiers who fought with the guerrillas, miniature war planes and ships and old paper denominations used during the war.

I can’t believe we just ended a 4-day tour in Puerto Princesa. Everything in the area is magically preserved through the years. I always look forward to coming again to the place and experience its other side, perhaps El Nido this time.

To my best travel buddy who was with me all throughout the trip, I hope you had a great time baby!

Still it’s a beautiful and complete life, something I’m always thankful to all those I owe!

Missed: a drop to Snake Island

This site uses Akismet to reduce spam. Learn how your comment data is processed.